The topic of leaking tile clips or leaking hooks (whichever you wish to call them) deserves its own dedicated blog. Explaining to a home owner why the very design that is holding their tiles down is the same thing that is now causing their roof to leak is difficult to believe and rarely well received. Luckily it is simple to understand. The biggest thing we hear from homeowners when we tell them they have leaking clip syndrome is “I’ve been living here for a long time why would the tiles be leaking now? I’ve never had a problem before”. This is a great clue as to the problem often being something that forms over time. So that I can create a fast but detailed explanation, lets answer these 3 questions.

Leaking tile clips occurs when the hook that goes over the edge of the tile can (often with the involvement of external factors) create a blockage in the water flow between tiles. If for many years there has been debris and dirt on the roof, the result is blockages in between the tiles. This occurs because, rather than the dirt and debris passing between your tiles and being flushed down into the gutter, the dirt and debris gets caught on the hooks and starts to build up like a dam in a river. The water then backflows over the edge of the tile and into the ceiling. 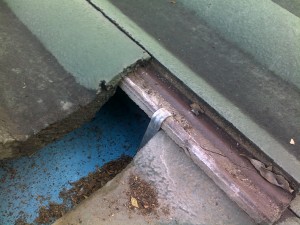 Notice the crack on the water channel. This can occur and be mistaken for leaking clips. 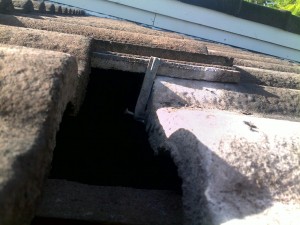 This photo perfectly show the hook over the edge of the tile and how the nail at the bottom holds to the timber.

How do I fix leaking tile clips?
Remove the clip by unhooking it, brush out the dirt and debris from the watercourse, and then use a differently designed spring clip different clip, (refer to the picture below). The ‘spring clip’ does not use a flat strap and allows the water to pass around both sides of the clips. Due to Australian building standards you cannot simply leave the hook off, as tiles still need to be held down to the timber structure.

Do I have options to fix leaking tile clips?
The options for fixing leaking clips on a tiled roof depend on the severity and the extent in which the clips are leaking. In some situations only a few clips will be leaking, however, there have been many instances when we have started pulling up tiles and have found that the vast majority of clips are leaking. The reason that the homeowner may not know this is because a clip can cause a leak into the ceiling but it may be a very slow leak. Therefore, when the rain stops, the ceiling dries and the mark/stain does not show up visually on the homeowners ceiling inside the home. It can take years for a leaking hook to actually appear as visible damage on the underside of the ceiling. While it may not appear on the ceiling inside the home, from the other side (inside the roof space), you may find that a very different story is told. Sometimes drip marks are seen throughout the entire ceiling. 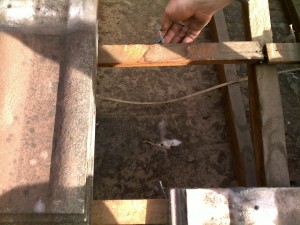 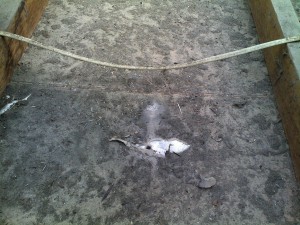 Nail clips are designed to hold the tiles down to the timber structure of the roof. There are other methods to hold the tiles down including wire and nails, but unfortunately maintenance on these tiles can prove more difficult. Lifting tiles that have been nailed down to timber can often result in damage to the tile. Removing tiles with wire is extra work as it means cutting the wire or untwisting the wire, which has to be done from underneath. While a lot of leaking nail clips fail due to maintenance of dirt and debris, there are also situations where we have seen the nail clips leak without any debris in the watercourse. Put simply, there are a few different factors that can cause nail clips to leak. While I have kept specific with dirt and debris in the article, be sure to call us for further information.

Want to join the discussion?
Feel free to contribute!